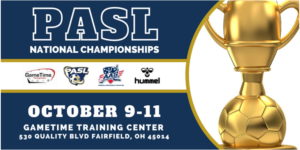 The Premier Arena Soccer League (PASL) is pleased to announce new dates for its “Winter” National Championship Weekend to formally conclude the 2019-2020 season. The event will take place October 9-11 at GameTime Arena in Cincinnati, OH, which was the host of the 2018-19 championship.

The PASL’s Winter Nationals were originally slated for March, but were impacted by the COVID-19 pandemic.

A formal schedule will be sent out later this month, but the tentative itinerary includes Referee and Coaching licencing programs, and a PASL Annual General Meeting, with tournament games on Saturday and Sunday.

“We are excited to host again. We had a really successful event here in 2018-19,” states Craig Rhodis, owner of GameTime. The tournament will be for both the men’s and women’s championships.

“The PASL is proud to be able to offer a National Championship for our teams and players,” stated PASL Commissioner Kevin Milliken. “They all put a lot of effort into their seasons. We didn’t want to walk away without a satisfying resolution, so we were patient and took our time to make a plan, and we’re excited to get back to work.”

The PASL will announce more details and sign up information for the Referee and Coaching licensing programs, which are sanctioned by the American Association of Soccer 5-6-7.

Founded in 1998, the PASL is the longest continuously running national arena soccer league in the United States. For more information go to: www.arenaleague.com